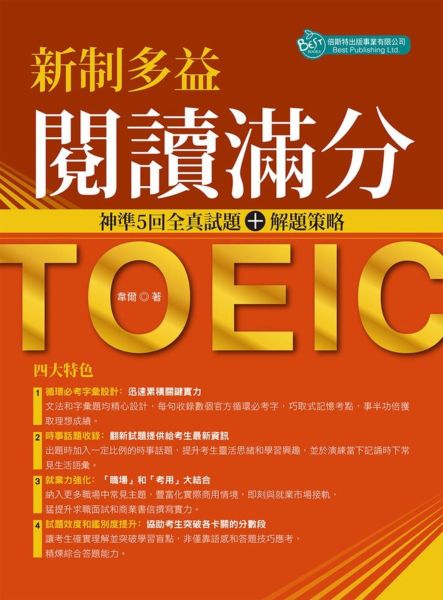 TEST 1 PART 7 【倍斯特專欄﹕面試結果未如預期】 Dear Susan, It’s great to have that kind of ambition, but having an overt ambition can do you more harm than good. You said that you felt like you had nailed the interview and couldn’t think of any reason why you didn’t get picked. After doing some thinking, I come to understand why, and most twentysomethings answer those types of questions wrong. Just answer that you will feel satisfied with the current position and you are ready to give all you to the company. You don’t have to say something like you are aiming for a position that exceeds your current position. That can be the interviewer’s job or those senior colleagues’ future goals. The point is that they don’t know you, so you just have to keep that ambition to yourself. Even if you get hired, I feel a little bit concern about your future in the company. You might encounter some hurdles that are totally unnecessary. Best Column 親愛的蘇珊 有這樣的雄心壯志很好，但是有著過大的雄心可能對你弊大於利。你說你覺得你對於面試結果感到胸有成竹了，卻想不透你為什麼沒能雀屏中選的理由。在思考過後，我了解到原因為何，而大多數20多歲的人在回答這樣的問題時都回答錯了。僅須回答你對於現在應徵的職位感到滿意，且對於公司的事務會全力以赴。你不需要說到一些像是，你目標其實著眼於超過你現在職位的職缺。那可能是面試官的工作或是那些資深同事的未來目標。重點是他們不認識你，所以你自己知道自己的雄心就好了。即使你獲得聘用，我對於你在公司的未來感到擔憂。你可能會遭遇到有些全然不必要的阻力。 倍斯特專欄 TEST 4 【倍斯特專欄﹕該做多久呢?】 I’ve got to say, if it is your first job, then do it for at least two years. Unfortunately, that’s the kind of the rule that was passed down from generation to generation. (1) To be stricter, then 3 years. You can hardly say that you have already known your current position, if you haven’t been working in that industry for three years. (2) And trust me, when you are job hopping, that’s the criteria that all interviewers are looking for. (3) “Three” also means a thorough experience in that job and can do the job independently. You will find yourself doing your job a lot more smoothly than someone with less than three years of working experience. (4) And that also demonstrates stability, and that’s very important. Even if you aren’t job hopping, you will be shouldering more job responsibility from the boss or superiors…so try to do your current job for at least two years before making the transition… 第70天 我們都已經接受了為期一個月的額外嚴密訓練，也都迫不及待地要展開我們的旅程了。今天發生了一些事情。我們在靠近宿舍處神秘地獲取了一個甕。我們一百位團員聚集於此並將其打開。裡頭有封短信陳述著，在瀑布那裡有更多的事情會揭露。然後，我們都在想這個地方在哪裡呢?且迫切要去找尋這個地方。就像我先前所述，我們購買了一部吉普車，所以在備妥後，我們都坐上車且準備要找尋瀑布。在行駛兩個小時後，我們發現了一個小徑，然後我們停靠在旁…朝裡頭前進。景色無與倫比…還有這裡有猴群在製造噪音。最後，我們發現了瀑布…到底有什麼藏匿其中呢? Day 72 We set a tent here and dried all our clothes. While making the fried fish for dinner, we figured out a way to get the stone. We swam down there to get them. Of course, we had to hold our breath long enough to get those. That required a piece of equipment. Luckily, one of our teammates was a great swimmer. He made a few attempts and couldn't get one. While we were about to give up, the monkey pointed to something in the place where we camped. It said “press”. Out of curiosity, I pressed the button. Then the huge wall gradually rose up and the water became less violent. It was actually the good time for us to gather all of the stones. We eventually got 10 stones, which boosted our morale. Day 75 A guy in our team would like to quit, and of course I said no…there is no quitting…and we have to find who's behind this. (1) Then all of a sudden, another team arrived at the scene as well, which increased our confidence to check if there actually was a giant spider in there, and of course we have to evenly split the credits with them…but fine…some of us were ready to ambush and some of us were ready to strike with the weapon. (2) We stayed motionless for a moment and decided to toss a coin to decide which team went in the cave first. Our team members lighted the torch and went in there. A giant spider horrifically stood there and we yelled loudly. So ten of us v.s the giant spider. (3) We threw several knifes and it remained undamaged. Then I threw the torch out of my hands for no reason…perhaps because I was too nervous…so the fight ended…the spider was a fake…and we found boxes of heavy stuff in the cave…(4) …we are going to get rich… 194. What is NOT mentioned about the discovered gold? (A) The gold was authentic. (B) They eventually knew who took the gold that they miraculously discovered. (C) The gold had to be evenly distributed to all attendances. (D) It was stashed in different containers. 195. What is NOT indicated about the team during and after “the spider incident”? (A) They were now professionally trained, so they were gallant enough to tackle the real spider. (B) They couldn’t stand the gas generated by the burning of the counterfeit spider. (C) Their hope shattered because the gold unexpectedly disappeared. (D) The appearance of ostriches led them to another new adventure. 197. What is NOT mentioned about the map? (A) The map can give the team an upper hand. (B) Because they were locked under the basement, they had no choice but to purchase the map from the company. (C) They extracted all the paintings from the wall. (D) The guy imitated the map to sketch an identical one. 198. What is Not True about golden ostriches’ eggs? (A) They were concealed behind these paintings (B) Keys were in these eggs. (C) They were shattered by the guy’s teammate. (D) They were carried back to the jeep successfully.
展開